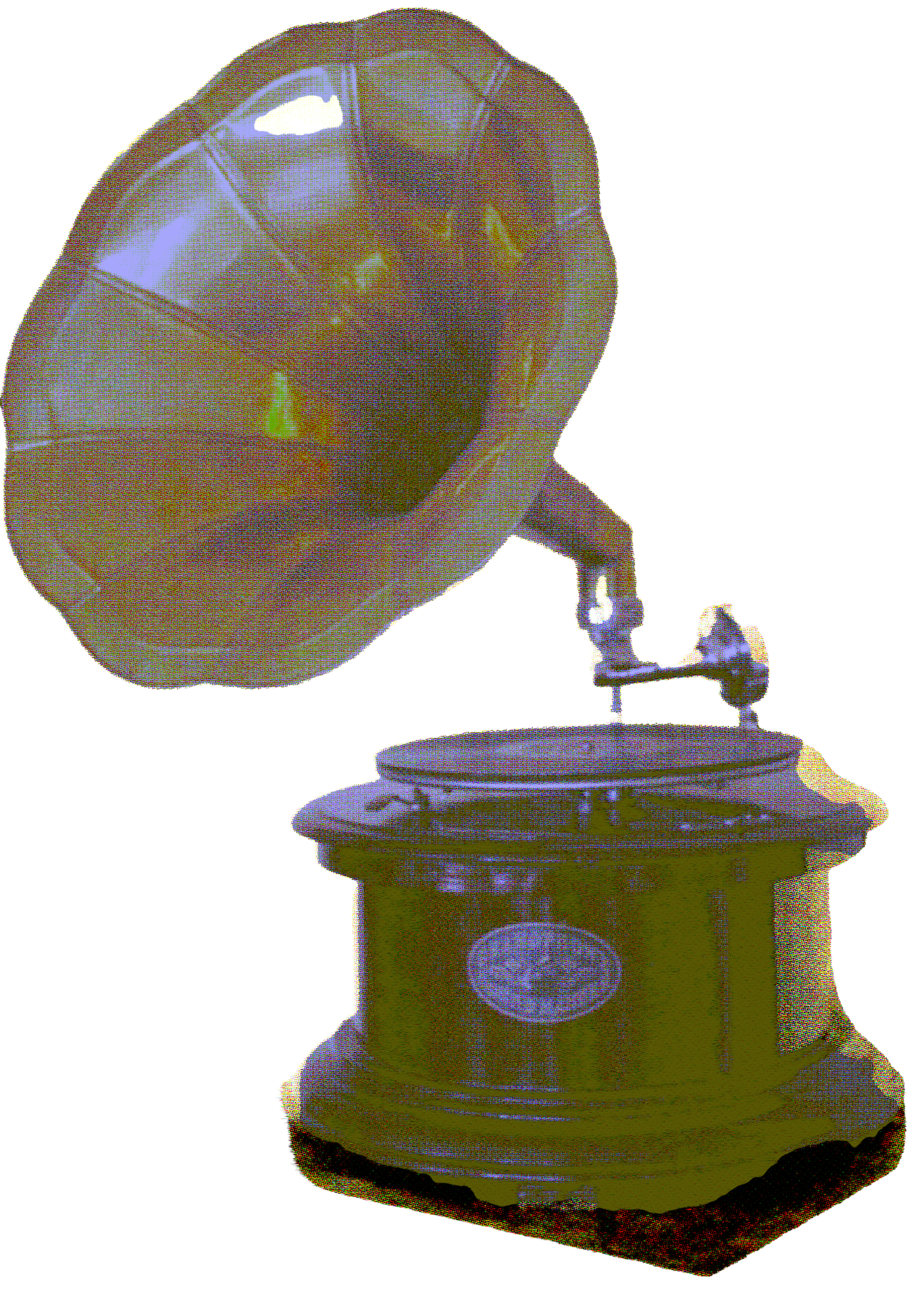 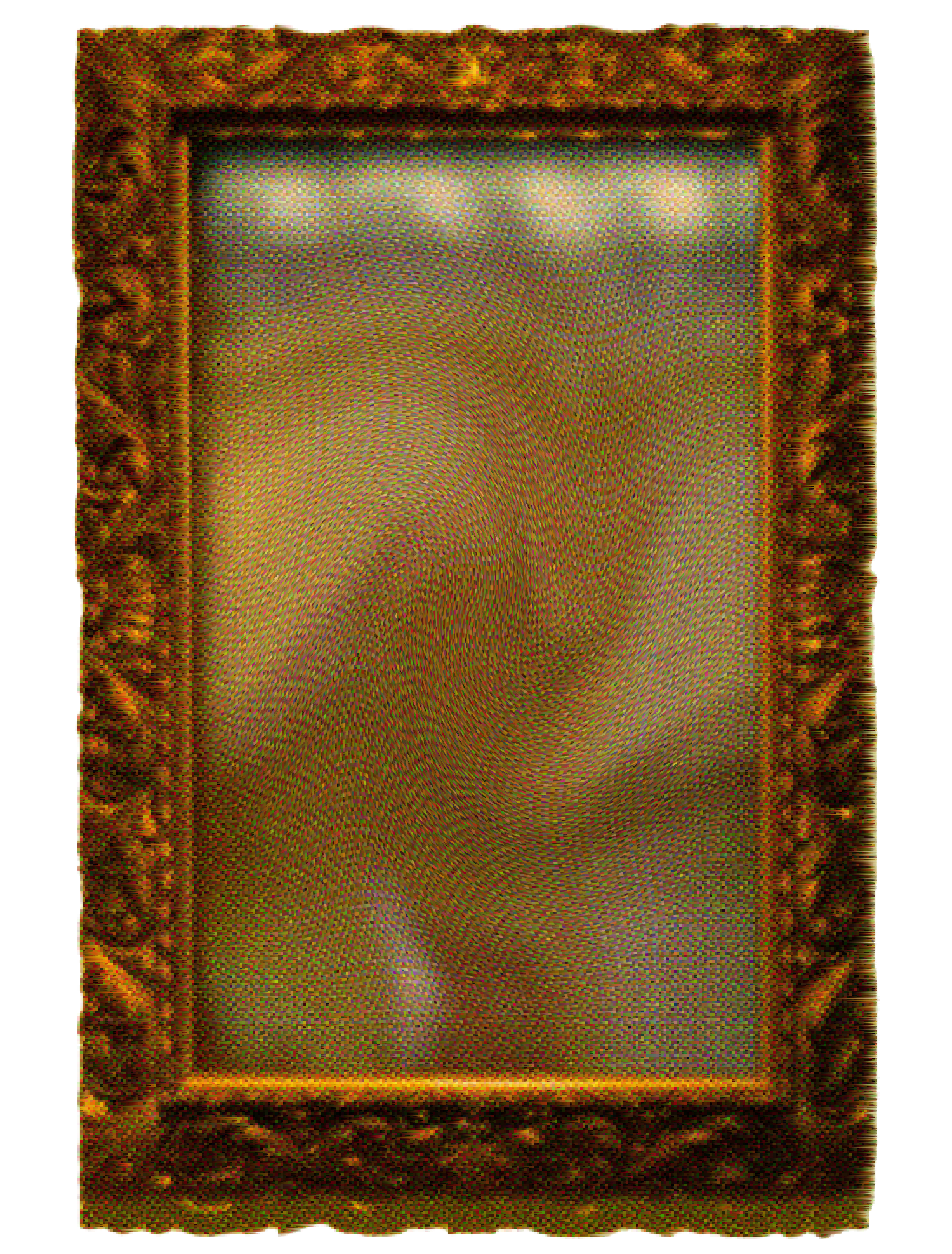 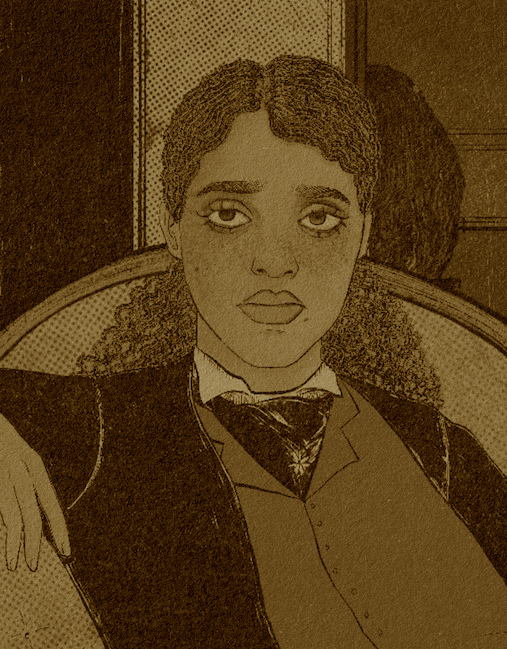 Vincent was born and raised in London's East End. After the death of his mother, he was taken into the Sutherland house, the home of a white family she worked for in the West End. Vincent's arrival confirms the affairs and ongoing absence of his father, David Sutherland, a pain the rest of the family takes out on him. The Sutherlands agree to take Vincent in on the condition he denies being related to them, and throughout his life, demand conformity and gratitude.

After a desperate attempt to escape the cruelties that surround him as well as increasingly disturbing apparitions of himself, Vincent is institutionalised by his father. He escapes the asylum under circumstances he still doesn't fully understand, and moves back to the East End, where he finds his old neighbourhood is rapidly disappearing.
‍
Vincent's relationship to place is tenuous after years of being told to hide where he came from, and he struggles to make sense of home. He has spent most of his life yearning for acceptance, and continues to look for it in all the wrong places. 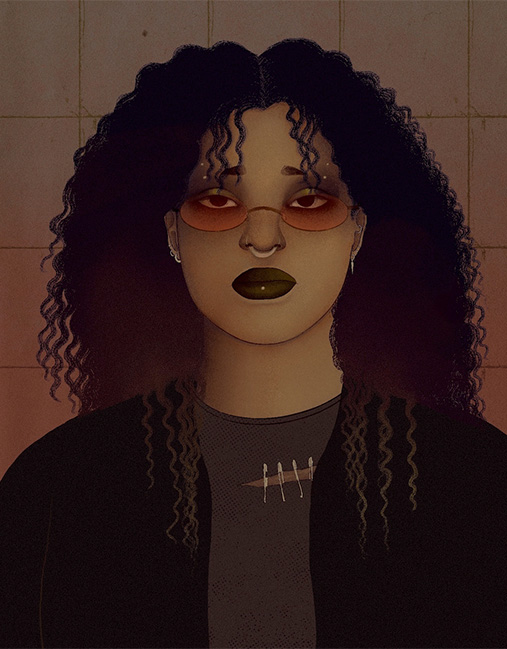 Naledi's experiences with psychosis taught her early on that understandings of reality could be divergent and multilayered. Being haunted by interdimensional ghosts of herself was a new adjustment, sure, but not as weird as some of the other things they've seen, and in some ways has felt less isolating. Her ghosts help her ground during crisis, and will return her to her body and help her leave it as needed.

In an effort to make sense of their life, Naledi meticulously documents unexplained phenomena. It doesn't take them long to realise they're not the only one experiencing the hauntings, and across time, they begins to seek out others with memories like theirs, leading them to Vincent and Dr. Harding.
‍
Comfortable with flux and impulsive by nature, Naledi loves unexpected and incongruent fashion. She thinks out loud and in colour, where her thoughts form geometric shapes she holds in her hands.

She dreams of a future she fears is increasingly threatened, and has a crush on Eboni, who thinks they're chaotic but (frustratingly) also a little endearing. 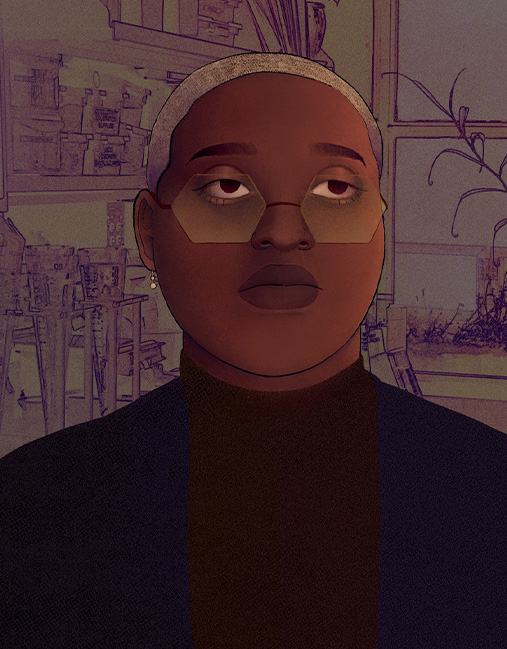 A scientist specialising in cellular death and memory in plants, Dr. Harding is criticised for being too subjective at work and overly objective outside of it. They are intensely private and struggle to make sense of their experiences, often turning to plants as a means of understanding themself.
‍
Praised for being dedicated as often as they are accused of being rigid and neurotic, Eboni is highly conscientious and often occupied with details and tasks. More than anything, they want to rest. They are haunted by doubt and what they call the consequences of remembering, an eloquent phrase for a much deeper fear that something is irreparably wrong with their experiences of memory and time.

Dr. Harding's life is built around their work, which gives them a sense of identity, control and perhaps most importantly, distraction from the ghosts they desperately ignore. When Naledi reaches out to them, they are hesitant to reply, but as the hauntings they experience escalate, they answer her on an uncharacteristic whim. 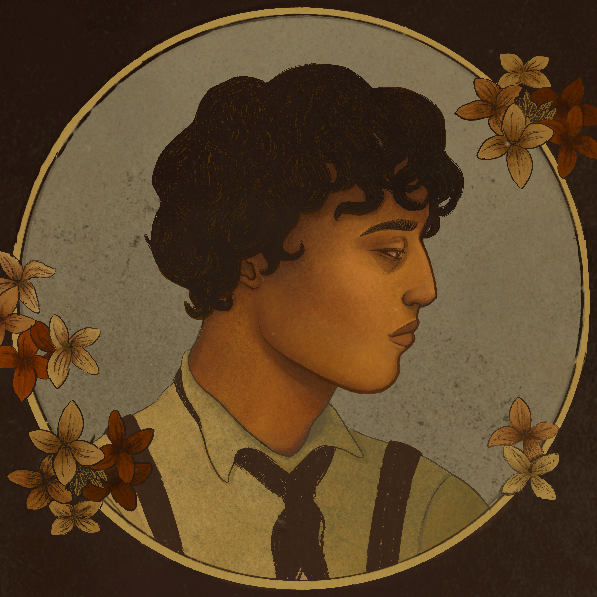 An apprentice at an East End printing press, Henri is extremely driven towards the future and believes print might have the potential to connect people not just across the world but also across time. He has a crush on Vincent but is afraid that once this is spoken, a precious dream will end.

Henri picks up publications for people around the neighbourhood and reads them out loud whenever asked. He secretly loves penny dreadfuls and ghost stories.

Henri grew up in France before immigrating to England as an adult. He yearns for a home that is stable and lasting. Now that he’s found a family of friends and comrades in London, he’s witnessing this community disappear. Between impending gentrification and a growing sense that something supernatural might be at play, Henri is determined to find a way to protect those he loves before it’s too late. 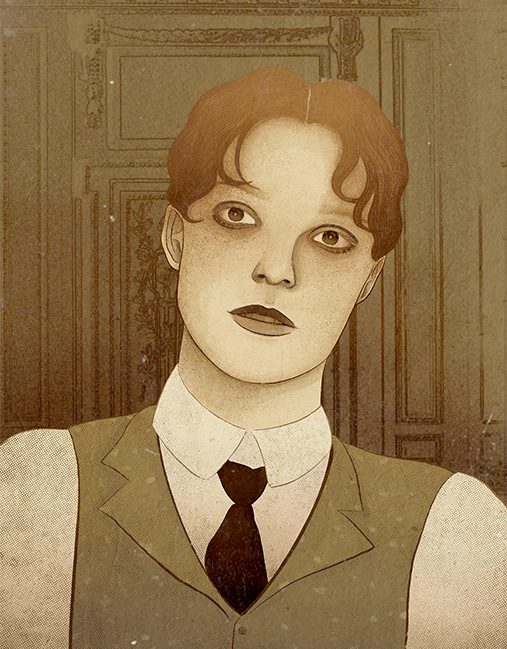 A mysterious man Vincent meets in the West End and takes a liking to.

Stellan is easily intrigued and delighted by social etiquette, which he learns quickly and mimics as a game. He is frivolous and charming, but generally lacks awareness. He can mimic sounds and voices with perfect accuracy, but has since learned humans find this unsettling. 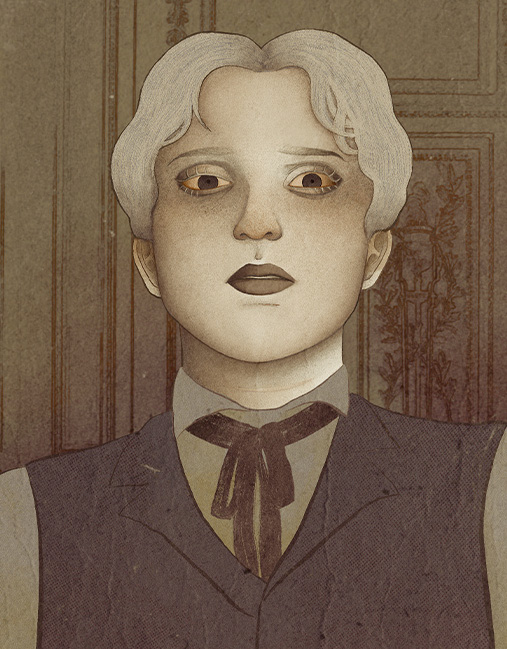 Stellan's companion. Has an affinity with insects and often appears at dawn and dusk.

Elias grew up in a small village in Sweden, where he was raised by a family that interpreted him as unnatural and evil, the unworthy duplicate of a child that would never be returned to them. When stories of a creature in the forest began to circulate in his adulthood, Elias ventured further past the boundaries of the village, where he made a pact with something he didn't understand.
‍
He and Stellan immigrate to England together, where they meet Vincent in London's West End. 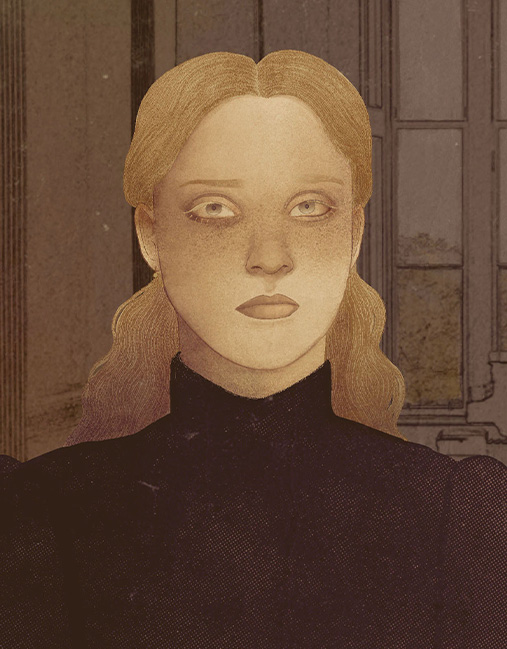 Vincent’s half-sister. Though she yearns for a life outside the bounds of the Sutherland house and society's expectations, Evelyn chooses to remain committed to her privilege. 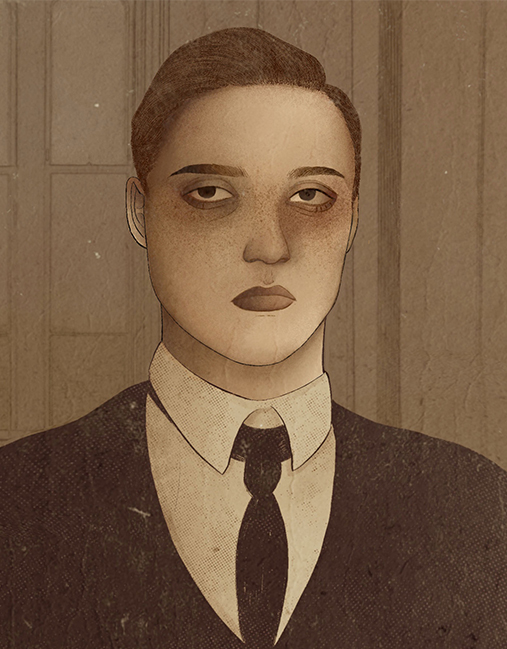 Vincent’s half-brother. He resents Vincent and refuses to acknowledge him as part of the family, believing him to have brought shame on them ever since he was taken in.